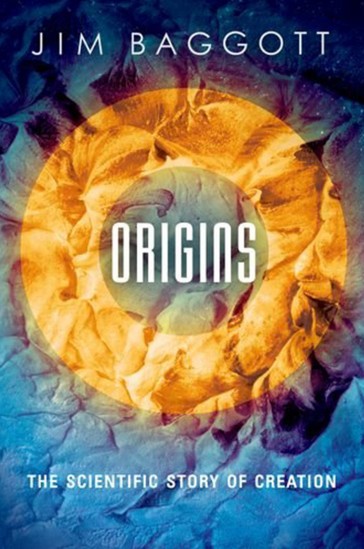 Origins: The Scientific Story of Creation

There is no such thing as an ‘authorised’ or ‘official’ version of the scientific story of creation, but if there was, then it might look something like Jim Baggott's 'Origins'.

We have a seemingly innate and rather insatiable desire to want to comprehend our own place in the universe, to understand how we and everything around us came to be. This is a desire driven in part by simple curiosity. But it is also driven by a deeper emotional need to connect ourselves meaningfully with the world which we call home.

Origins provides a unique, up-to-date, single-volume telling of the story of creation, in a chronological sequence from the big bang to the emergence of human consciousness, 13.8 billion years later. It draws on the latest scientific thinking to describe the origins of space, time and energy, light, matter, stars, galaxies, the Sun and Earth, life, complex life, animals, humans and human consciousness. All in one book.

Origins is our story. It is about how the world on which we live came to be, how life began and evolved to produce us: conscious, intelligent beings capable of a rational, scientific investigation of their beginnings. We have learned that, to all intents and purposes, the universe does not appear to have been designed with us in mind. Science tells us that we are very much a naturally-evolved part of this reality, but we are not the reason for its existence.

And although we know (or think we know) much about our origins, there are still many gaps and some pretty big mysteries. For the incurably curious among us there is much still to learn.

Origins is without doubt an ambitious project, but Baggott executes it masterfully

There are few writers with such an impressively broad understanding of modern science.

The Quarterly Review of Biology

… abounds with excellent visuals. At its best, Origins reminds me of Richard Holmes’ marvellous The Age of Wonder.

… this guided tour through space, mass, time and energy is spectacular.

A reminder that independent scholars can turn their hand to grand narratives in ways that over-specialised Dons rarely do any more. An incredible achievement.

One of the most adept explanations I have seen for some time of science applied to the world around us.